For another consecutive year itrust consulting sponsored Hack.lu and had a speaker at the event. Maxime Morin held the Workshop: Radare2 - a framework for reverse engineering.

"The cyber security in Luxembourg and the new law on electronic archiving" addressed in Lëtzebuerger Gemengen's September edition.

Cyber Security – from an operational to a strategic issue

Carlo Harpes presents lessons learned on research and innovation in security at a cyber security seminar in Luxembourg.

TRICK Service, the risk assessment and management tool by itrust consulting, is now referenced in the RM/RA tools inventory of ENISA.

TRICK Service referred to in Lëtzebuerger Gemengen's March 2015 edition. Register now to obtain a free demo of the product.

"How to monitor cyberrisks on a critical infrastructure ?", an article summarising the results of the CockpitCI research project was published in the 2nd edition of the Scientific biannual booklet of Revue Technique Luxembourgeoise 2014. 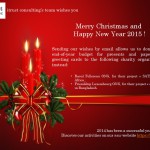 Sending our wishes by email allows us to donate our end-of-year budget for presents and paper-based greeting cards to the following charity organisations instead:

itrust consulting sponsors and is present at the Botconf 2014 - conference dedicated for the fight against botnets, from 3-5 December, Nancy, France.